I have a serious issue with starting series and then not finishing them and just starting other series instead. It’s a problem. I have so many first books in a series or first two books and I want to finish them. I want the closure, I want to know how the stories end. I just need to pull myself together. So, this post (which will probably become a series of posts) is more for my benefit than anything else. So, here are the series that I have started, would like to continue with, but I just haven’t for whatever reason.

This is going to be a VERY long post.

The Darkest Minds by Alexandra Bracken 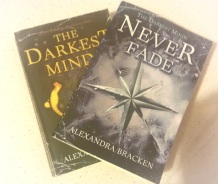 Still have to read: In the Afterlight + novellas

Okay, in my defense, the second one just recently came out.

Still have to read: Return to the Isle of the Lost

Thankfully, this is just a duology, which is pretty rare these days. Not that I don’t like longer series, but this will be much easier to cross off the list.

Still have to read: Shadowscale + The Audition which is a short story

Still have to read: Prodigy, Champion

The Lunar Chronicles by Marissa Meyer

Still have to read: Scarlet, Cress, Winter, Fairest, Stars Above and I’m pretty sure there are some other short stories.

Me Before You by Jojo Moyes

Again, the sequel only just came out. So I don’t feel too bad about this, but I’m putting it here for posterity.

Still have to read: After You

Percy Jackson and the Olympians by Rick Riordan

I only currently own books 3 and 4 in the series, and again, so annoyed that they’re not only different formats, but different cover editions. I’m probably going to end up buying a box-set of these.

Still have to read: The Last Hero + The Demigod Files

The Chronicles of St Mary’s by Jodi Taylor

This is a really long one, but I really loved the first book, so at this point, I do want to continue reading it. How many of them I will actually read remains to be seen. I have also listened to one of the novellas – The Very First Damned Thing – on audible.

Still have to read: A Symphony of Echoes, A Second Chance, A Trail Through Time, No Time Like the Past, What Could Possibly Go Wrong, Lies, Damned Lies and History + novellas

Daughter of Smoke and Bone by Laini Taylor

Still have to read: Dreams of Gods and Monsters + short stories

The 5th Wave by Rick Yancey

I haven’t seen the film either. I’ve heard mixed reviews about it though, so I’m not sure whether to watch it at all.

Still have to read: The Infinite Sea, The Last Star

Okay, this post is way too long, so I’ll have to do this in parts. Part two coming soon.

15 thoughts on “Un-finished Series Part One”