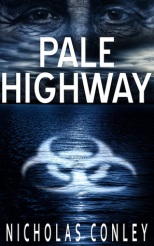 Synopsis: Gabriel Schist is spending his remaining years at Bright New Day, a nursing home. He once won the Nobel Prize for inventing a vaccine for AIDS. But now, he has Alzheimer’s, and his mind is slowly slipping away.

When one of the residents comes down with a horrific virus, Gabriel realizes that he is the only one who can find a cure. As the death count mounts, Gabriel is in a race against the clock and his own mind. Can he find a cure before his brain deteriorates past the point of no return?

This book was bizarre. I received an e-copy of it from the author in exchange for a review. And it’s taken me a while to read it. When I was first approached about it and read the synopsis, I was quite intrigued by it. I had hopes for it. But it was just so weird, I don’t even know how to approach this review.

As a sci-fi novel, it was pretty bad. For one thing, it’s so implausible. I mean, it takes place in 2018. That’s like, next year. And I don’t know, I feel like if you’re going to write a sci-fi novel… don’t alter well established history. Nobody’s cured AIDS to this day, and Gabriel Schist is supposed to have done it years ago. I know this is fiction and all, but that just didn’t sit well with me at all. Not to mention that the way the narrative goes, Schist wanted to cure AIDS before it even existed, like huh? I get that he’s a genius, but that’s not genius, that’s being prophetic.

Then there were the talking slugs… I normally wouldn’t give so many details about the story, but just… talking slugs? I mean, I guess it was trying to make us question whether or not it was real, since Gabriel’s mind was going, but all it managed to do was be very weird. It was honestly uncomfortable to read. So, as a sci-fi novel… it fails.

As a sort of… allegorical, philosophical thing… it has more merit. Although it’s still really uncomfortable to read. There’s an attempt at tackling sort of religion, science vs faith, that kind of thing. Although I feel like there could have been a better analogy for God than a Giant Sky Amoeba. I couldn’t really tell if he was trying to ridicule faith or trying to be as “objective” in the depiction of both sides of the argument as possible.

The best part about the story was the glimpse it provided into the life and mindset of the patients in a nursing home. And I can tell that unlike anything else in this book, that is drawn from experience. Conley worked in such a nursing home, I believe. And it was really eye opening in that sense and it really speaks against dehumanising these people just because they can’t function normally anymore. It also dealt a little with alcoholism and the struggle that recovering from it can be and I thought that was also done pretty well.

The writing in itself was actually good. It was evocative, it wasn’t too heavy or too boring. It alternated between past and present, which was a nice way of learning more about Schist’s life without it just being endless internal monologue. And they were tied nicely together as Gabriel dreamt of events in his past. The writing was well done.

Overall, this book was strange. It had it’s good aspects, but it just didn’t sit that well with me for some reason. It just made me uncomfortable, to tell you the truth. It was just bizarre and I’m not sure I can put my finger on exactly why it made me so uncomfortable (though the talking slugs probably had something to do with it). Man, this was a long review!