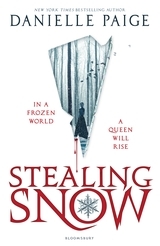 Synopsis: Seventeen-year-old Snow lives within the walls of the Whittaker Institute, a high security mental hospital in upstate New York. Deep down, she knows she doesn’t belong there, but she has no memory of life outside, except for the strangest dreams. And then a mysterious, handsome man, an orderly in the hospital, opens a door – and Snow knows that she has to leave …
She finds herself in icy Algid, her true home, with witches, thieves, and a strangely alluring boy named Kai. As secret after secret is revealed, Snow discovers that she is on the run from a royal lineage she’s destined to inherit, a father more powerful and ruthless than she could have imagined, and choices of the heart that could change everything. Heroine or villain, queen or broken girl, frozen heart or true love, Snow must choose her fate

Where do I even begin. This was advertised as a Snow Queen retelling. But it was more like a weird mongrel retelling of 5 different stories. It was just all over the place. But okay, let’s say I can live with that. It wasn’t very seamlessly done, but okay. Whatever.

But this book has the ABSOLUTE WORST love… can’t even call it a triangle. It’s a freaking polygon. And not only that, but it’s got one of the worst cases of insta love ever… twice. I just wanted to puke.

And then we have Snow. She is so annoying, and whiny, and inconsistent and stupid and I hate her. Mare Barrow from Red Queen, Scarlett from Caraval and Snow from this book…. I want to tie them all together in a nice bundle and throw them in the ocean with a stone tied to them. I hate them so much. As for the other characters… I just could not care less. They were bland and boring and had exactly one personality trait that was basically their entire identity.

I didn’t care about the story either. I didn’t find it compelling at all. I didn’t find it clever or creative or interesting. It was predictable and tried too hard to have many twists and turns and be surprising, but it just ended up sounding like a soap opera except without the paternity discussions. It was confusing and predictable at the same time.

I can sum up the worldbuilding in one word: snow. Basically, the only thing I remember vividly about the world is that there’s a lot of snow. And a tree. It was just nonexistent. So, yeah… there was nothing to redeem this book. I liked nothing about it. Not even one small detail that I enjoyed. I’m really disappointed. I’ve heard Dorothy Must Die is actually good, so I might give that a shot, but I was really disappointed by this. I’ll have a rant about it, if you want to know more details about exactly what I didn’t like, go read that.