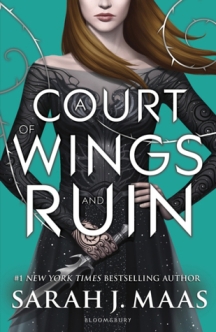 ***SPOILER ALERT*** THIS IS THE THIRD BOOK IN THE SERIES. THEREFORE, THE SYNOPSIS AND FOLLOWING REVIEW MAY CONTAIN SPOILERS FOR THE PREVIOUS BOOKS

Synopsis: Feyre has returned to the Spring Court, determined to gather information on Tamlin’s maneuverings and the invading king threatening to bring Prythian to its knees. But to do so she must play a deadly game of deceit—and one slip may spell doom not only for Feyre, but for her world as well. As war bears down upon them all, Feyre must decide who to trust amongst the dazzling and lethal High Lords—and hunt for allies in unexpected places.

I have to say… I was a bit disappointed by this one. It wasn’t by any means bad, but it failed to live up to ACOMAF and there were some things that I didn’t really like, that I thought weren’t done well or were too rushed.

That’s one thing actually, there were a lot of things that felt rushed, despite this being a 700 page book. I’m generally against unnecessarily dragging out series just to sell more books, but I feel like this could have been two 4-500 page books instead of one 700 page one.

But, first, let’s talk about the things I loved. I still loved the Night Court, of course. They were as fun as ever and I loved learning more about them. I loved seeing more of Prythian and meeting all the High Lords. One of the most surprising things that I loved was Tamlin’s character arc. I think in terms of character development, Tamlin’s was the best and most subtly done in this book. I loved learning about some of the more mysterious creatures, such as Amren and the Bone Carver.

I didn’t quite like Feyre as much in this one as I did before. I felt like she started sounding a lot like Aelin. I love Aelin, but Feyre is not Aelin. I feel like writing the two stories at the same time got Sarah to confuse the two voices a bit and I felt at times like I was reading Throne of Glass instead. Still, I did really like the completion of Feyre’s acceptance and forgiveness of herself that started out in ACOMAF.

One thing that really annoyed me, especially in the first half of the book were the sex scenes. I feel like there was an unnecessary amount of them. Like… we already know that Rhys is a hot hunk of fae High Lord and it’s hard to resist the urge to climb him like a tree, but we don’t need to be told every time it happens, especially not in so much detail. It was repetitive and it just got boring and I found myself skimming over those scenes. Also, the word “mate” was abused beyond reason.

I thought the pacing towards the end wasn’t very good. Everything felt so rushed. It just sort of happened all at once and there was often very little explanation and it felt like those things just happened because they were convenient for the story. And that’s why I think if this were two books, there would have been time to pace it better and properly explain and explore things. There were a lot of elements that were brought in, presumably as a sort of entré for the companions, but it just made it feel very rushed and sometimes confusing. There was just too much happening too quickly. I felt that some of the main cast’s stories were left hanging. And I know there will be subsequent books, but as far as the information we have now, those will not be a continuation of this story.

There are many other things that I enjoyed or disliked, but I can’t really go into them without spoilers. I have a spoilerific discussion  where I will be discussing those in more depth. Overall, I obviously loved the book, but it just wasn’t as good as I expected it to be. It was mainly due to the execution, I feel like it could have been done better, particularly knowing the kind of writing that Sarah is capable of.

6 thoughts on “A Court of Wings and Ruin by Sarah J. Maas – Spoiler Free Book Review”