Another month over. Despite it being a pretty hellish month for me, I managed to read 8 books and I’ve posted every single day in May on here. That’s something I’m quite proud of and it’s been really good for me. It’s given me some focus. So I’m really pleased with this month. Anyway, here are the books I read this month.

This was a re-read for me. I’ve been going through the series again on audio and I’m really enjoying it again. Despite the narrator’s appalling pronunciation of names (the worst ones are Brienne as BRY-een and Petyr as PUH-tyre, they trigger me every single time). Hopefully, by the time I finish this re-read, we’ll have a release date for Winds of Winter. Please? 5/5 stars

I’ve been meaning to pick up this series for a long time and I finally did. I really enjoyed the book, but I also found some things very problematic. I talk about it more in my review, but I had a problem with how both men and women were portrayed in this book. It was otherwise very well written and compelling storytelling, but do be aware that it contains violence, sexual, physical and emotional abuse, animal abuse, pretty much any kind of abuse you can think of. 3.5/5

City of Brass by S. A. Chakraborty

This was an audiobook I picked up on a whim and ended up enjoying a lot more than I thought I would. Especially towards the end, it was a bit slow to start with. I didn’t mind the pacing as much as I just didn’t like the insta-love that was focused on a lot in the first part of the book. As a result, I didn’t like any of the romance in this book. There’s a kind of love triangle, I can’t tell yet if it’s intended as a love triangle or one of the sides is intended as just a friendship. I would prefer the latter, but even then, I’m just not a fan of that character so I still wouldn’t love it. That kind of goes for all the characters, really. I found them all quite dis-likeable. That’s not to say that I hate them and I think at times the unlikeability was intentional. I still find them compelling, but I don’t love them. I really do love the world however and the political environment and mythology. That’s really what I’m here for. 3.75/5

Another audiobook. I think the majority of books I read this month were audiobooks. And I actually do recommend this story as an audiobook. I think it’s the best way to experience it. It was one of the best thriller/mystery books I’ve read in a while. I’ve reviewed it, so you can check that out, but it’s amazing and I recommend it. 5/5 stars

One Word Kill by Mark Lawrence

Mark Lawrence has become one of my favourite, auto-buy authors. This was such a fun, short weird and heartwarming book. I believe the second one came out this month and the final book in the series is due to be released later this year and it’s just so much fun. It’s like Doctor Who meets Stranger Things. 3.75 stars

The Life of Pi by Yann Martel

This has been sitting in my Audible library for some time and I finally decided to listen to it. I’m very glad I did, I really loved it. It’s such a beautifully told story and I really love survival stories. I love reading about people’s will to survive and the ingenuity that is brought out by that desire. I did fundamentally disagree with some of the main ideas of the main character. And that actually affected my rating of the book. Normally it wouldn’t, if they had been conveyed as simply something that the MC believed, it wouldn’t have. But the way that it was portrayed, it was one of the main things that the books was trying to convey. 3.5/5 stars

Half a King by Joe Abercrombie

I’ve been doing pretty well with reading authors that I already know I enjoy. I really like having read all or most of an author’s works if I enjoy their books, of course. There’s just something very satisfying about it. But like with finishing series, it’s something I’ve historically not been great at. But I’ve been doing that more lately and I’m glad. I really enjoyed this book, in some ways I liked it even more than his other series. It’s definitely not as complex, it’s aimed for a younger audience. But as a result of that, I didn’t struggle with the pacing the way I sometimes did with The First Law books. 4/5 stars 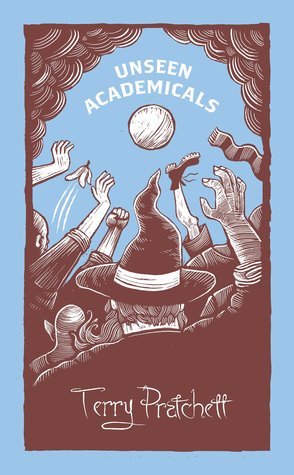 I’ve only read one other Terry Pratchett book, but even I could tell this is not one of his best. It was one of his later works when he already struggled with Alzheimer’s, so it’s to be expected. It was still highly entertaining, especially the Audible audiobook. It’s full cast and it’s a show almost. It’s got sound effects and everything. It’s a lot of fun, I do recommend that if you’re able to get it. 3.5/5 stars