As I mentioned in my November wrap up, from now I will also include books I’ve DNFed or am partway through in my wrap-ups. I only completed 1 book in December as I was pretty slumpy and just wanted to play video games and watch Netflix. But I did read a fair bit of a few others.

Doctor Who – The Tenth Doctor Adventures Vol. 1 by Matt Fitton 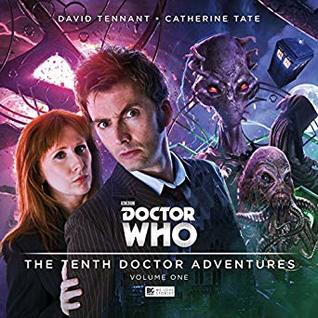 I basically re-watched the first 7 series of Doctor Who in December and I was just in the mood for it. So when I saw this in a Audible deal, I had to get it. It’s the only book I completed in December, but it was great fun. I gave it 3.5 stars.

I started this in November. I didn’t read much of it in December, perhaps around 100 pages. I’m currently on page 324 of it. I jumped straight into this after finishing Words of Radiance, but I guess after about 1500 pages of the same story, I wanted a bit of a break. I’m definitely loving this book, but I did want to read other things as well. Also, I don’t want to finish it too soon, because then I have a whole year to wait for the next one.

I read Assassin’s Apprentice in November and surprised myself by picking this up almost straightaway. I got maybe 80% of the way into it. I’m audiobooking it, so I don’t know exactly what page. But I didn’t like something that happened and stopped. I’m not DNFing it, but I just wanted a break from it. Although I have to say, this is probably my favourite in the series, despite the thing that happened that I didn’t like.

The Ten Thousand Doors of January by Alix E. Harrow

I also read about 130 pages of this in the very last few days of December. I am enjoying it, but I realised now that I have a problem with magical realism. I thought it was a problem with Erin Morgenstern’s writing, because hers are really the only magical realism books I’d read, but I realise now that it’s the genre I have a problem with it. I enjoy it, but I don’t get immersed in it and I struggle to read a lot at a time. After reading 20-30 pages, I feel like I need to stop. Whereas with normal SFF books, I can easily read 80-100 pages before I start feeling tired. So now that I know that, I think I will actually enjoy magical realism more because I’ll just go into it with the mindset of reading it slowly and won’t get frustrated when I need to stop after only 20 pages.