This has spoilers. You have been warned. I do also have a spoiler-free review of the series if you want to check that out instead. This is mainly a discussion for the final book, but I will also be talking about the series in general.

I didn’t like this book. I loved the first two, but I hated the ending. It’s so unsatisfying. The problem that we spent two books on, namely Goddard and the New Order Scythes is not solved. At all. Sending a bunch of people into space to possibly set up colonies and start over IS NOT A SOLUTION!!!!! I am so mad at that ending. It’s rubbish. It’s utter rubbish! I know that Goddard did die, but it still wasn’t a solution. It just happened because Rand was fed up. But the resolution of the plot was to send a bunch of people into space and hope. Which was a stupid solution.

Especially with the whole fail-safe thing. Scythes were cancelled, basically. So the Thunderhead could have intervened. He could have like supplanted the New Order Scythes. Or it could have let one of its copies that didn’t have the stupid no-intervention rule to supplant them. Or something. I don’t know, literally anything would have been more satisfying than what we got. They could have dealt with Goddard and THEN tried colonising space. That would have been fine. And if the colonies were successful, they could cancel the fail-safe too and then it would have been even more utopian. I don’t understand why do it this way. It’s stupid and totally unsatisfying and it ruined such a great series.

Also the fail-safe was so anti-climactic. We spent so much time building up to it and then it all resolved in like one chapter. We barely got to see any repercussions for it. Everything was just left open ended and I hate it. I don’t always mind open ends, but this one sucked. And it didn’t make sense. If it had made sense, I think I’d have been okay with it, but it just didn’t. There were so many better solutions to all the problems. And I just find it hard to believe that the Thunderhead, who supposedly was never wrong, figured that this was the only viable option.

I also didn’t like where most of the characters ended up and how their stories developed. Wasn’t a fan of Greyson’s story arc in the final book. He could have been so much more interesting based on the first 2 books. The whole Toll thing was just… meh in my opinion. I didn’t hate it… but I just found myself uninterested whenever his chapters were on. I didn’t think he really evolved in this book and he was annoying at times when interacting with the Thunderhead. To be fair, the Thunderhead was being infuriating as well.

I would have been… okay with how Citra and Rowan ended up. If it had been under any other circumstances. But considering how much I hated the space thing, I was not happy with how their story developed either.

I didn’t really care much about the two new characters. The captain and the former nimbus agent. I forget both their names. I didn’t really like the captain, I found him/her annoying on several levels, but at the same time, I could very easily ignore that because I just didn’t care about him/her. I have no opinion whatsoever on the nimbus agent. I think she was bland, to say the least.

I think the only character I was okay with how they ended up was Faraday. I think that all things considered, he’s the only one who got a somewhat satisfying ending.

So yeah, I’m very mad at this book. I have strong feelings, which just goes to show how much I cared. It’s such a great story and I’m really mad that it got such a crap ending. It deserved better.

Synopsis: A world with no hunger, no disease, no war, no misery. Humanity has conquered all those things, and has even conquered death. Now scythes are the only ones who can end life—and they are commanded to do so, in order to keep the size of the population under control.

I have mixed feelings about this series, as you can see from the rating. I loved the first two books, but I did not really like the finale. I talk about it more in my spoilery discussion, but basically the ending didn’t make sense to me and I didn’t like it.  But I’m getting ahead of myself.

This series has one of the most interesting utopias I’ve ever read. To be fair, I’ve not read that many, but this is very well written and cool. I think it does a very good job of imagining what society might look like if there was no death or disease and I really liked how it touches on… does life really have any meaning when you’re not needed and how our sense of meaning is tied to work. I think that’s really interesting and I think overall the series does a very good job of presenting these questions for the reader to  consider and answer.

I also liked the characters. I didn’t necessarily like where they ended up and how stuff progressed, but I did like the characters themselves. Though they did frustrate me at times. As for the plot, like I said I really enjoyed the first two books and I even enjoyed a good chunk of the third book, but the ending… no. Just no. I didn’t like what happened and I didn’t like the way it happened. It’s hard for me to talk about it without spoilers, so check out my discussion for more details.

I would still recommend this series, I think it’s definitely worth reading and everyone might not have the issue with the ending that I did. And even if you do, I would still say it’s worth reading for the rest of it. But just be prepared for a potentially unsatisfying ending. I know this review is very short, but most of my thoughts on the series are spoilery, so I can’t really talk about them here.

Top 10 Tuesday is a weekly meme hosted by That Artsy Reader Girl, though originally it was created by The Broke and the Bookish. This week the topic is most anticipated releases for the second half of 2019

I am not really anticipating that many books for the second half of the year. I have 6 which I want to talk about. However, there are several more that are books in series I haven’t started reading yet, but I’m anticipating really enjoying. So I can’t really say I’m anticipating the release of these books because I haven’t read any books in the series and it might turn out I actually don’t like the series. But I think that I will love those series. So I’m going to talk about those as well in the second half of this post.

I am ready, I have been waiting for 2 years. I can’t wait to read the conclusion to this series. I’m thinking of maybe doing a re-read of the first 2 in August, but I’m not sure yet.

This is the only one on this list that is not a sequel. I don’t know much about it and I want to keep it that way, but I think it’s a kind of portal fantasy and I love those kinds of stories, so I’m intrigued and looking forward to reading this.

I’m currently on volume 3 of this and I’m glad we’re getting another volume this year, because this is one of the coolest weirdest graphic novels I’ve read. I want to know what happens and honestly I’d love to see this as an animation. Someone please make an animated series of this. The world is so rich and the story so unique and gruesome at the same time. I would love to see this as an anime. Studio Ghibli, please get on to it.

I just read Scythe and am currently reading Thunderhead and I’m so glad that I’ll have book 3 almost right away. This is the best utopia/dystopia (I find them to be the same genre, but with different emphasis, really) I’ve read in a long while.

Any Mark Lawrence book is automatically anticipated for me and I’ve been spoiled this year, I get 4 of them!

This is my year of Brandon Sanderson, I feel it. I’ve already read 2 Sanderson books, I’ve just ordered Words of Radiance. I’m definitely going to read this when it comes out. Give me all the Brandon Sanderson.

These are all the books that I’m actively anticipating for the seocond half of the year. I’ve read a lot of older books that are in series already completed I feel like, this year, so I haven’t gone into new series as much. And I’ve also somewhat shifted away from YA, which I think is far more promiscuous than adult SFF. However, there are few more series with books that are being released this year that I want to talk about.

This is the second book in a Chinese inspired fantasy. I haven’t read the first book yet, but I’m anticipating really enjoying it. If I do get to it this year, I’m glad that I’ll have book 2 to get to right away if I like it as much as I’m thinking I will.

I still haven’t read The Handmaid’s Tale. I own it and I really want to read it (I think I may have put it on my Book Junkie Trials extended TBR), but I don’t know if I will get to it this year. Because I’m nervous about reading it. But I fully expect I’m going to like it and I’m excited we’re getting a sequel. 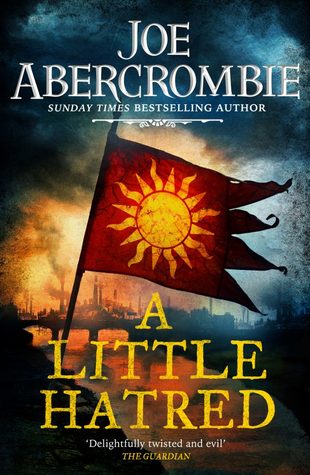 I’m putting this in this section because I’ve only read the original First Law trilogy. I have a lot of reading to do before I can get to this, so I’m not really actively anticipating it since I can’t read it right away anyway. But I did really like The First Law and I plan to catch up with this world and eventually get to this. Though it won’t happen this year. Also, I really don’t like this cover. I hope they will release it with a matching cover to the rest of them, because I love those covers. I mean, can you even compare?

Although I see that books 5, 6 and 7 don’t have matching covers, so there’s little hope. 😦